After using the Super X-Fi technology (which aims to make the listening experience more “immersive” through what is called “7.1 holographic audio”) in the world of headsets to listen to music, now Creative raises the bar and aims to bring its intriguing peculiar feature even in gaming field. The product that embodies this vision are the Creative SXFI Gamer, headphones sold at a price of 129.99 euros on the official website. It is a wired headset, which mainly targets PC and console players, but can actually also be used on mobile devices. On paper it seems to be a very interesting product: will the Singapore company have managed to make good headphones? 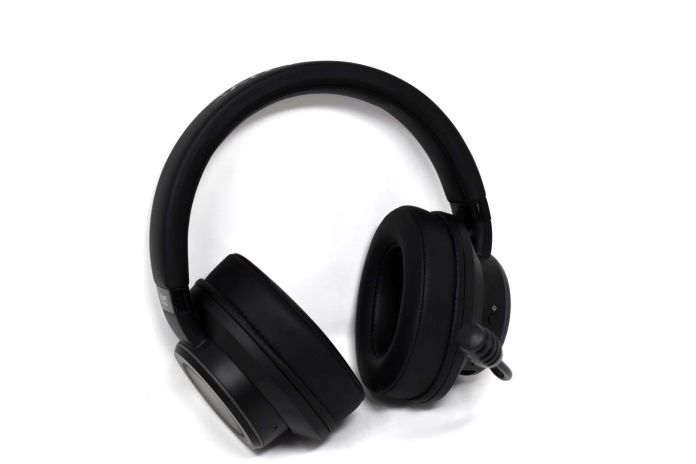 The sales pack contains, in addition to the headset, a jack cable, a Kevlar-reinforced USB Type-C / USB Type-C cable for use on mobile devices, a USB Type-C to USB Type-A adapter for the connection to PC and console and the removable microphone. Already from the equipment, it is clear that we are talking about a headset that aims to be versatile, given that it can be used on multiple platforms. At first glance, the design may appear similar to that of normal headphones. But it is when you connect the Creative SXFI Gamer to the USB port of the PC or a console that you perceive the gaming soul of the product. In fact, the two pavilions are surrounded, by default, by a green light which creates a particularly pleasant effect.

These are not the classic LEDs that we have seen in many other configurations: the pavilions light up both inside and outside and recreate a sort of alien spacecraft (among other things, the color matches well with that of the Motion Tracker of Alien: Isolation, the mind takes us back to that imaginary). We really appreciated this stylistic choice. 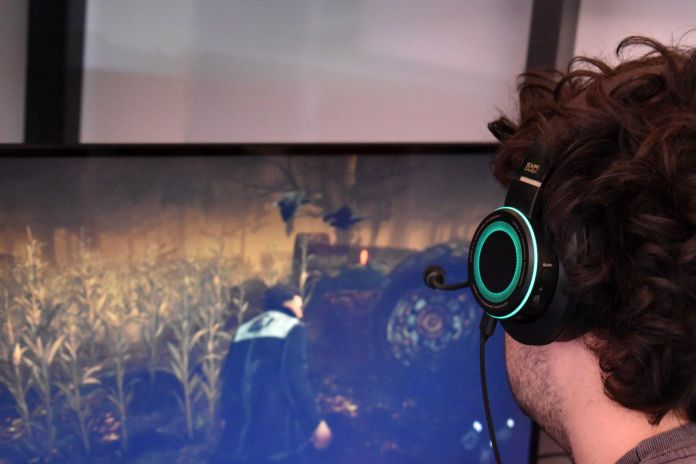 The design has no other particular flashes: the main material used is plastic and the headband, which is adjustable and has the word “Creative” at the top, is not exactly the most padded. In any case, the Creative SXFI Gamers stand out immediately for the left pavilion, since the latter has the key to activate Super X-Fi technology, the volume wheel, the button to activate/deactivate the microphone, the USB Type-C port, the input for the removable microphone and the button to change the LED effects (fixed, RGB colour flow or off). In short, through the physical keys, it is possible to exploit various possibilities. Generally, the “alien” look of the SXFI Gamer he convinced us all in all. 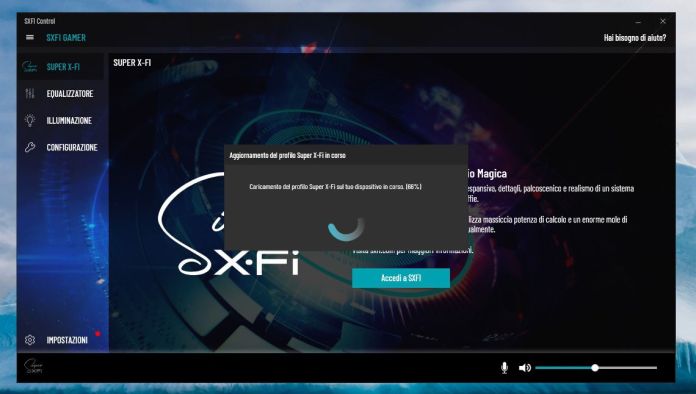 The design is certainly an important element in the choice of gaming headphones, but they are comfort and sound quality to really make a difference. In this sense, the SXFI Gamer can be used well, but perhaps they are not the most comfortable headset on the market, given that we had the feeling that they are going to press more than necessary on the garment.

Don’t get us wrong: we managed to end very long gaming sessions without any particular problems, but we found more comfortable headphones also in this price range. To this must be added the presence of the cable, which some users consider essential for high audio quality and others see it as a “limit” for comfort. In this case, the needs and preferences of the individual user come into play. 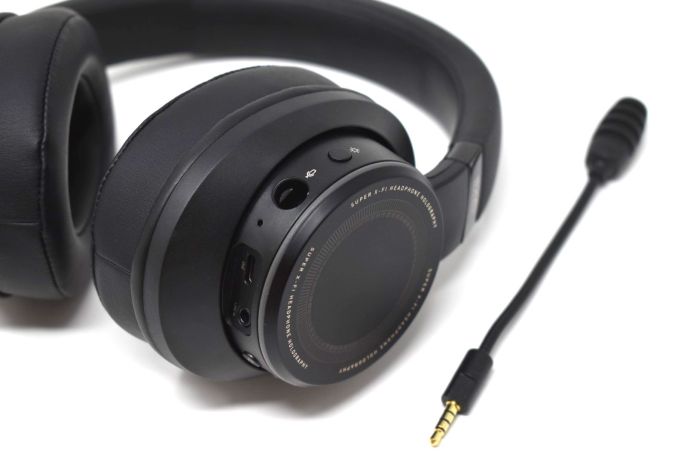 The aspect where you can’t really criticize Creative is audio quality. In fact, keeping in mind the price at which they are sold, the Creative SXFI Gamer perform very well during gaming. The sound spectrum is calibrated on the bass, which is reproduced in an optimal way and allow the user to perceive the footsteps of the enemies, as well as the environmental noises, without any problem. As for the mids, in reality, they are more full-bodied and enveloping than usual since from a gaming headset they usually expect not the best results. The same goes for highs, as they are more ringing than many other headphones we’ve tried.

Beyond the overall quality, which is excellent, the moment when the SXFI Gamers managed to amaze us is when we activated Super X-Fi mode while we were playing Rainbow Six Siege. More precisely, among the available options, the so-called “Battle Mode” it is able to make the context in which the gamer is going much more immersive. It is a feeling that must be experienced firsthand and can be explained up to a certain point, but it is good to give concrete examples to better understand.
During a game of a title that requires a lot of strategy like Rainbow Six Siege, you may find yourself behind a wall while an enemy is on the other side. We happened to hear an opponent take a few steps and kill him by shooting through a pre-fire. That slightest movement would have been less audible without Creative’s technology. 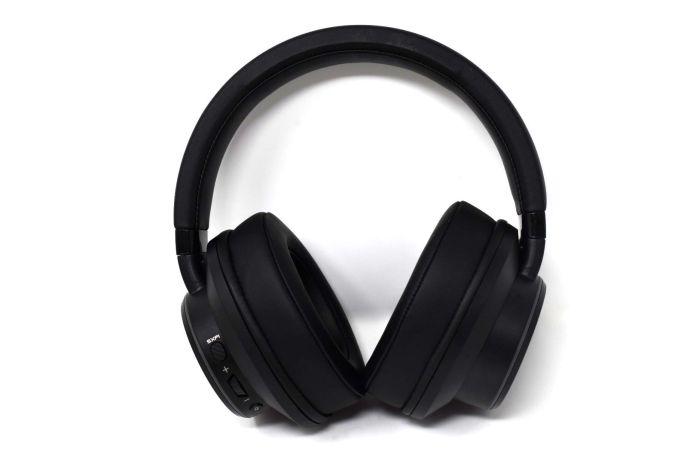 We then chose a title that bases much of its appeal on the atmosphere, namely Dead by Daylight, in which a team of players must try to activate generators without being discovered by the killer. Here audio is of fundamental importance since you have to move calmly, avoid running away the crows and be careful of the slightest noise, including the heartbeat. In short, it’s a perfect game to test Creative’s immersive technology.

In this case, we preferred the “classic” Super X-Fi mode over the “Battle Mode”, which is more useful in shooters. In fact, by activating this audio mode in Dead by Daylight, the sounds of the active generators, of the fire, of the footsteps of the teammates become decidedly more immersive and are able to better lower the user into the game world. 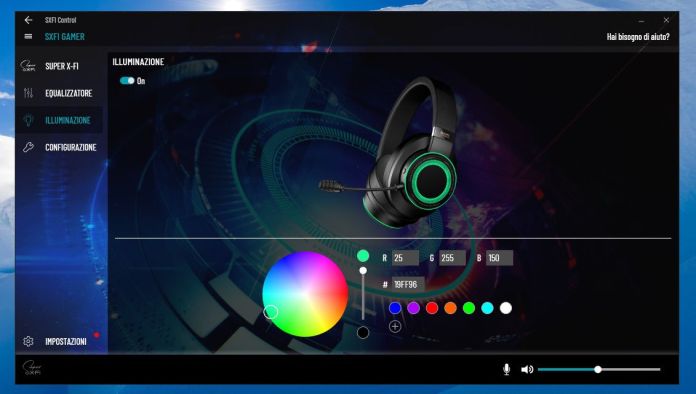 In short, at the level of audio quality Creative has done a great job. However, it must be said that to configure Super X-Fi mode on a computer it is necessary to use two software. In fact, it is not enough to install the SXFI Control program for PC, downloadable from the official website of Creative (it is also used to manage LEDs), but it is also necessary to download the SXFI app on your mobile device. This is because the mapping of the head must be carried out to customize the audio experience. It can be uncomfortable, as it is practically impossible to take pictures of your ears and face on your own, so you will need to get someone to help you finish the initial setup.

In case you are wondering, yes: you need to register with an account, from which you will then need to log in from your PC. In any case, as we said earlier, it is worth it, given the results in certain contexts. As for the removable microphone, which also lights up in its upper part, we have never had any type of problem with platforms such as Discord or TeamSpeak: our teammates have always heard our voice clearly and cleanly. It also has an integrated pop filter, so you don’t have to worry about the unpleasant effect that the consonants “B” and “P” might have.

There is no lack of SXFI in-person technology, which aims to distinguish the human voice from the background noises, in order to suppress the latter. You have to get used to the button to silence the voice (which among other things makes the microphone light flash), since it is located on the back of the left lower pavilion, perhaps not the most comfortable of the positions. 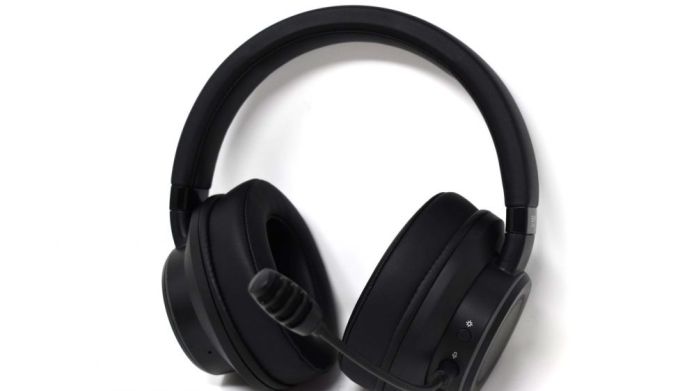 The technical data sheet of the headphones is completed with 50mm drivers and a frequency response of 20-20,000 Hz. Interesting is the possibility of simply replacing the pavilions, as well as that of using the headphones also on consoles. More precisely, Creative makes specific reference to support for PlayStation 4 and Nintendo Switch. In this case, as you probably have already guessed, it is not possible to configure from here, since there is no dedicated software.

However, Super X-Fi technology can also be used on consoles. You need to connect the headset via a USB port (and not through the audio jack). In doing so, lighting also works. In any case, the general audio quality is excellent here too and the microphone works correctly. On mobile devices, you can download the appropriate app and configure everything. In short, it is a very versatile headset.

Are you a gamer? Then why not Game for Rockinghorse?

ESA CEO: 64% of U.S. adults are gamers, 41% of players are women, older people are playing more