With mobile games like Call of Duty Mobile and Fortnite taking the world by storm, manufacturers have started making smartphones aimed specifically at gamers. Introduced in 2018, Asus has been the market leader in the gaming smartphone segment thanks to its ROG Phone series.

Each year, the specifications sheet only gets more ludacris. This year’s ROG Phone 3 is not just the king of gaming smartphones, but also a very good smartphone overall, camera aside.

Right off the bat I noticed how the ROG Phone 3 was enormous. It’s got a 6.59-inch AMOLED screen with some chunky bezels at the top and bottom – at least compared to today’s standards – and is slightly heavier than one would expect.

The tall orientation and aluminium frame means that the smartphone gives users a good grip when playing games in landscape orientation. However, for non-gamers, the extra weight (thanks to the 6,000 mAh battery) doesn’t feel justified. 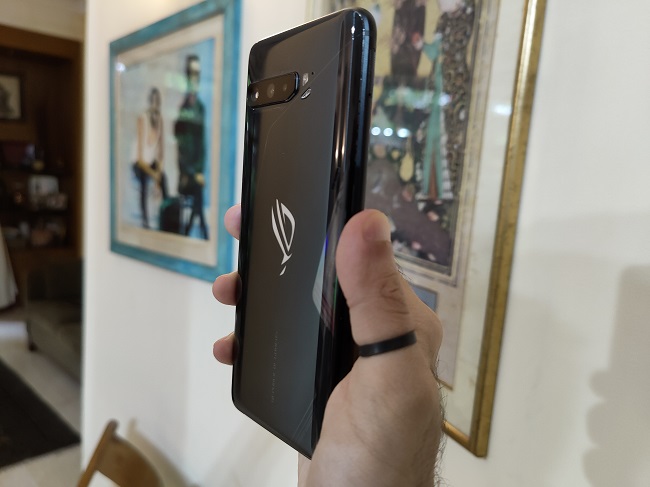 The right side of the phone has the power button and volume rockers, while the left-hand side features a side mounted port featuring a Type-C port and a proprietary connector for pairing accessories such as the AeroActive cooler. At the bottom is the main Type-C port.

There’s an in-display fingerprint scanner, which frankly was terrible, and two front-firing stereo speakers. The back panel feels more premium, akin to today’s smartphones, and has lost the aesthetic gamer look of the previous two generations. That may not be a bad thing, but it doesn’t help the ROG Phone 3 stand out in today’s crowded market.

No smartphone manufacturer currently supports a true variable refresh rate and that doesn’t change with the ROG Phone 3. The ‘auto’ mode tries to keep the device at 144Hz, which is understandable, since that is the smoother experience for the user.

The screen doesn’t come with any punch-hole cut out or a notch and it has rounded corners. It’s a distraction free display.

The display itself is quite satisfactory, though nowhere near the best in the business. It’s a smooth display with close to zero lag and stuttering. The colours may not be as vivid as on a Samsung smartphone, but it does the job.

The 144Hz refresh rate and 270Hz touch-sampling rate do help make the gaming experience that much better.

There’s no doubt in anyone’s minds that the ROG Phone 3 can handle whatever task is thrown at it. It’s a beast when gaming and pretty handy when performing day-to-day tasks as well. It’s got Qualcomm’s latest Snapdragon 865+ chipset paired with either 8GB or 12GB of RAM.

While multitasking between emails, camera, tabs on Google Chrome and gaming, I noticed no stuttering. The smartphone transitioned from one app to another with ease.

Thanks to the new and improved cooling system, the smartphone never heats up when gaming. Whether it was Call of Duty Mobile, PUBG or any other game, I had a blast playing to my heart’s content.

The downside here is the dated software. While it is based on the latest Android OS, the visual appeal seems to be fading. Asus could have done something to improve the look – icons, launcher and more – of the smartphone.

The speakers are one of the best I’ve used on any smartphone, thanks in part to the new GameFX audio. The improved speakers are particularly useful when playing FPS games on the smartphone. One can hear footsteps from afar and that is quite useful in determining the enemy’s location.

Is the ROG Phone 3 a good non-gaming smartphone?

Neither of the previous ROG smartphones were any good for snapping photos. They were frankly below average. With the ROG Phone 3, Asus has tried to improve that. The smartphone gets a 64-megapixel (Sony IMX686) primary sensor, a 13-megapixel ultra-wide (with 125-degree field of view) lens and a 5-megapixel macro camera. However, it’s strictly average for a mid-range smartphone these days.

The front-facing 24-megapixel camera does a suitable job in capturing selfies. It’s one you’d be comfortable in sharing on your social media platforms.

The problem is in the various different modes. The macro camera is hardly usable, bokeh shots are off the mark and there is too much skin smoothening on selfies.

The tall aspect ratio means that most video content won’t fill up the whole display and that’s a bummer. The viewable area is large enough though to try and offset any negative impact on the watching experience. The good part is there is no punch-hole or notch that can get in the way while consuming media.

The one problem though, for people who buy this smartphone, is the weight. It’s way thicker and heavier than Samsung’s Galaxy S20 Ultra and OPPO’s Find X2 Pro. It does have a massive 6,000 mAh battery that contributes to the weight. The overall distribution of weight isn’t great.

But that 6,000 mAh battery is a necessity in a smartphone like this. The 144Hz refresh rate display guzzles a lot of the power and we all know that gaming tanks the smartphone’s battery.

Still, I found that the 6,000 mAh battery was good enough to provide for one day of heavy usage (unless you game for 9-10 hours straight) and two days of moderate usage, which is quite good, all things considered.

Asus ROG Phone 3 is a smartphone with little-to-no compromises. It’s primarily a gaming smartphone that does suffice for most non-gamers. The cameras are the major disappointment here (though far better than its predecessors).

Besides gamers, the ROG Phone 3 is a device for those who want to consume media (those speakers are amazing) and want a long-lasting battery life.

The ROG Phone 3 is a worthy competitor in the crowded Android mid-range segment. The 8GB+128GB model is priced at Rs 49,999, while the 12GB+256GB variant comes in at Rs 57,999. A solid device at a great price makes for an attractive deal.

If you’re a gamer, then it is a no brainer. If gaming isn’t at all your priority, then the ROG Phone 3 may be a tougher sell.

Woodsalt is a creepy indie game with a ’90s JRPG vibe